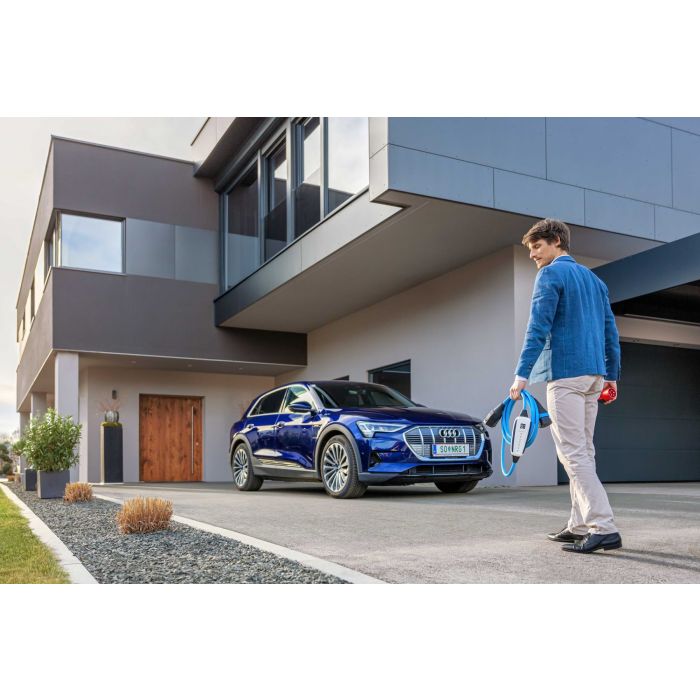 Leading innovation for a mobile generation: the NRGkick charger

The electric vehicle revolution is not just about the evolution of the automotive industry, but also the development of new smart technologies in the chargepoint sector.

At the forefront of chargepoint innovation is NRGkick.

Whilst traditional chargepoints are fully installed and hard to move, NRGkick is a new generation mobile charger, which you can use at home, at public charging stations or anywhere with a variety of interchangeable charging sockets.

A specially-designed connector system allows you to plug the NRGkick into different sockets, meaning it can be used as a Mode 2 and a Mode 3 charging cable.

This means that you won’t need an additional Type 2 cable – saving money and increasing convenience!

The NRGkick is so adaptable it is the only charging cable you need to charge your electric car!

The NRGkick includes integrated Bluetooth and WiFi interfaces which enable smartphone control of the charger.

A patented safety connector system, means that both pins of the NRGkick domestic Smart Attachments for household sockets are temperature monitored.

Since its debut in 2015, the NRGkick has been delivered to over 35 countries around the world.

The product has a strong reputation for its robustness and this is down to the philosophy that the highest quality is the minimum requirement in the production of the NRGkick.

In tests, it has withstood being driven over and it is IP67 waterproof.

A background to instill confidence

NRGkick was the invention of Austrian electromechanical experts DiniTech GmbH, who formed out of DiniTech e.U. in 2015.

DiniTech was founded in 2012 by Ing. Dietmar Niederl and has built a strong reputation for the development and production of electromechanical product solutions, with a particular focus on charging technology for electric cars.

Having purchased his first electric vehicle in 2013, Dietmar Niederl quickly realised that there was no charging flexibility that would allow him to charge the electric car at any power socket.

So he set about changing that, aiming to create a charging unit to fulfil a number of functions:

The result is the NRGkick mobile charging unit, which can be taken on any trip and can plug into a standard socket or public charging station.

The NRGkick could not be simpler to charge with. You can charge your electric car anywhere there is electricity.

You just connect NRGkick to any power socket and then connect the adapter plug to the electric car.

The charger provides the maximum charging power at any socket and uses all available phases of the 400-volt power grid, enabling charging capacities of up to 22 kW.

As a result, NRGkick can deliver up to ten times more power than most included emergency charging cables. So any electric car can be recharged in the shortest possible time.

The NRGkick is protected against theft by the automatic locking of the Type 2 charging socket during and after charging.

In addition, NRGkick’s charging current can only be adjusted by the owner.

The next generation of mobile chargers is here in the shape of the NRGkick. Why not contact Romatech today to buy one?